Last Spring we started the series of introducing key community members on our blog, where you also find the previous interviews with Alex Gomes and Toni Aaltonen. This time we turn focus on Italy where two guys are making 3D-prints enabling us to personalize our Jolla C and Intex Aqua Fish devices with a practical solution.

I got to interview Luigi Bruno, the man behind the project, and here you can read what he told about the upcoming new products.

What is it about and how did this all start? 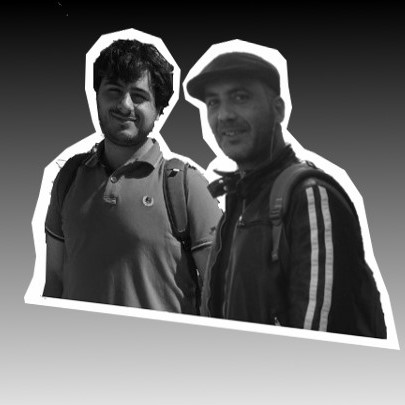 Within our community Luigi Bruno is most probably known for making The transparent Other Half as well as a few other accessories for Jolla 1. But he has also been active with local OS communities in Messina, Sicily, through which he become a really good friend with another OS enthusiast, Fabio Isgro. Fabio was the one who got Luigi’s interest back on Finnish technology and later again the one who brought up something new and worth being passionate about. Luigi tells that he still remembers Fabio presenting Jolla Smartphone to him like it was yesterday.

Jolla showed up to them as a company that was founded not only for money making but as something committed to development and where people could be passionate, doing what they love. Thereby, he tells, it was easy for both to relate to the new social network and connect their co-operation around it. Now both Luigi and Fabio are active members of the Jolla community and taking their visions into actions.

As said, this design adventure within Jolla community started already with Jolla Smartphone which Luigi describes been relatively simple when all the information for the creation of The Other Half was available online and the design of the device itself was beautiful and just ready for the bumper. Luigi thereby was basically left to work with the printer settings only. The start with Jolla C and Intex Aqua Fish phones was anyway not as easy since the .stl file for the new devices was not to be found even with the help of the community.

Eventually after unsuccessful search Luigi went after the answers by himself. By exploring the device, testing different softwares and simply trying, started the creation of the second model of the bumpers. All was done alongside with the day job Luigi has as a floral designer. The project demanded a lot of pre-work before actual printing and several test prints before finding the optimal combination but it bear fruit.

The finished product has now found its form and is ready for the users to enjoy. 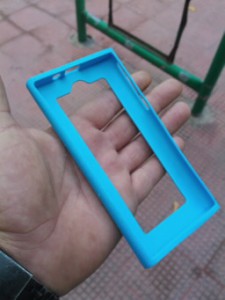 Bumper cases are made of special elastic PLA which is flexible and resistant for outer impacts.

When asked if Luigi has done something similar to this project before he tells that even though he has been doing accessories for his designs with the same methods, never before anything as detailed and exact with measurements. Still he admits that as his job asks certain kind of taste for beauty and personalization he has now had advantage of it with the project. Luigi describes 3D printing being like versatile coastline that offers dramatic possibilities for customization and product uniqueness; for him it’s like an endless playground that enables making something special and unique.

How are they made and how do we get our hands on the products?

Luigi continues telling more about the printing process and product details that this edition of bumper cases is made of new material, different to the elastoplastic which previously was the only 3D printing material. PLA, the material he now uses, is much cheaper and can be found in almost every color –  unlike the previous – while it still preserves the preferred characteristics.

Check the video below about the characteristics of the new material! The bumper can be pressed “to the size of the lemon” and it returns back to its original size like nothing happened.

The innovation and technical drawings is one thing – but there is also post production to be taken care of. Luigi underlines that the post production is actually at least as important as the designing and development; the product is not ready straight from the consumer printer but the material has to be worked on after. In this project Luigi takes care of the post production of each product by himself. To get an idea how the 3D printed products are taken care of, read Luigi’s tutorial about the post production for TOH for Jolla 1 with elastoplastic. There are sketches made also about TOH for Jolla C and Intex Aqua Fish, Luigi reveals, but with its complicated details it is still much harder to make so that batch remains yet to be seen.

The artist describes that the bumper case is designed so that all the corners of the device and the display are protected. Back side has a wider frame so that Jolla and Sailfish OS logos are well visible. He also tells that after this long development work the bumpers give excellent protection against accidental shocks and sudden outer impacts. Case gives also a practical way to personalize our devices. At the moment the color options are set to be black and white but also cyan and silver.

The community is seen as a great power and possibility by the bumper makers. User experiences help to develop even better products and Luigi is hoping for feedback later. He says that all the suggestions, advice or constructive criticism for him is wished and welcomed. At the end of the interview Luigi adds that the plan is to involve Jolla C and Intex Aqua Fish owners beforehand by offering a pre-order possibility after which the new bumpers will be made and sent.

We finished the interview with Luigi’s thoughts about the development on more general level as he added:

“One suggestion I’d still like to make! A request for the community in the spirit of constructive criticism; we should leave supporting the marginal or not so prominent value of Android as the spur for the developers. I understand that today the popular apps have much value but our browser system is not that fast yet. If you stop to think, possibly tomorrow the development of the web apps will probably pass the development of the native apps; We will start using apps through the browser then.

Finally thank you, Jolla, for the opportunity given to me and about the visibility this is giving to my work and ideas.” 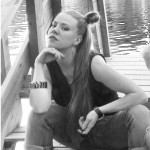