As we continue our Sailfish tour of World Heritage Sites, today we reached Vanha Rauma, the old heart of Rauma, a city that sits along the coastal road between Pori and Turku in the southwest of Finland and on the banks of the Rauma river. Vanha Rauma is a living monument to the enchanting style of old Nordic wooden construction. Home to 800 inhabitants, you’ll find beautiful examples of 19th Century Neo Renaissance-style exteriors alongside the immaculately preserved 15th Century Church of the Holy Cross. As the Visit Rauma site puts it, walking around the town is like “stepping into a fairy tale”.

We aim for the beautiful Sailfish user experience to bring a similar elegance and simplicity to an otherwise busy and distracting world. But the beauty on the surface has to be backed up with cutting-edge technology underneath which keeps up with modern standards and developments.

That’s why in the 4.4.0 Vanha Rauma release we’ve been working hard to improve compatibility across the board, keeping up with recent browser and feature developments. At the same time, we’ve been refining the user interface to allow all the new features to be exposed in a way that doesn’t impact on the simplicity of your device in daily use.

Special thanks to Kees van Niftrik for allowing us to use his beautiful photo of old Rauma for the update.

A major change in Sailfish OS 4.4.0 Vanha Rauma is the introduction of a new browser engine based on Mozilla Gecko ESR 78, an update from the ESR 60 engine from previous releases. The “ESR” in this name stands for “Extended Support Release”, which means that the engine has continued to receive bug fixes and is therefore especially stable.

The browser engine is a large piece of software. To throw some numbers around, the core engine is comprised of 39 245 files of generated and compiled code (13 798 479 lines of C++ and Rust) and 71 277 files of dynamic code (8 177 160 lines of Javascript). Getting it to work on Sailfish OS is a large task, and when we started the process ESR 78 was the most recent Extended Support Release of Gecko available. It’s also an important update since it’s the first release for Sailfish OS to make use of the Gecko Quantum engine, which we’ve had disabled in previous releases for stability reasons. Mozilla benchmarks the new engine at twice the speed of its predecessor. That doesn’t translate directly to the user experience because the renderer is only one piece of the stack, but we’ve been doing our own benchmarks, which we’ll be making available on the Sailfish OS Documentation Site.

As with previous browser updates, we’ve also taken the opportunity to add features and refine the user interface. WebRTC audio and video have been improved to better support browser-based video calls. Navigation and tab control have been improved, so that closing a tab will take you to the tab you previously had open, and hitting back on a pop-up window will close it and take you to the tab that spawned it. The browser interface and menu have been updated with feedback and code contributions from you, our users. These changes are all aimed at making your browsing experience smoother and more intuitive. Even if you may not directly notice the changes, we hope you’ll find the totality a more enjoyable browsing experience.

The result of all this is the fastest, most compatible and most feature-full Sailfish browsing experience yet. 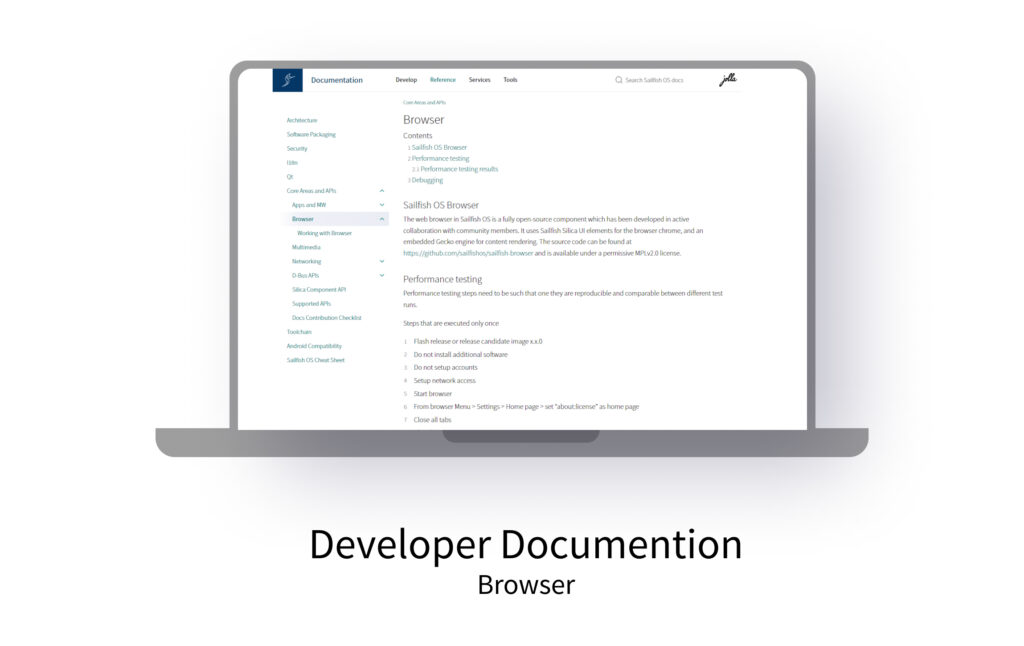 While the browser changes will have a big impact in several areas, in practice it’s just one example of the very many improvements  you’ll find permeating the Sailfish 4.4.0 Vanha Rauma release.

Another new feature we particularly like is the ability to pair Bluetooth devices using NFC. Just tap another NFC-capable Bluetooth device such as a speaker, and your phone will automatically create a new pairing if one hasn’t already been made, or initiate a connection if it has. Take a look in the NFC page of the Settings app to control this new functionality.

From within the stock Camera app you can now apply a variety of effects filters. Greyscale, sepia, posterise, whiteboard and blackboard are all provided by default, and on the Xperia 10 II these can be used with all three of the available camera lenses. You can now see the results of the filters directly as you compose your piece, take the shot and upload the results using the inbuilt sharing interface, without ever having to leave the camera app.

You can also view all of your historical photos more easily with the introduction of a date-based scrollbar to the Gallery app. What’s more, we’ve also made this new scrollbar widget available for use by other apps, including third party apps. If you look around you’ll find it in use throughout the operating system already.

Our Android app support has been updated and improved, with the Android 10 base being updated to r62 security patch level, as well as improvements to allow video and audio calls to work correctly with Android apps, including Telegram, Whatsapp and Threema. 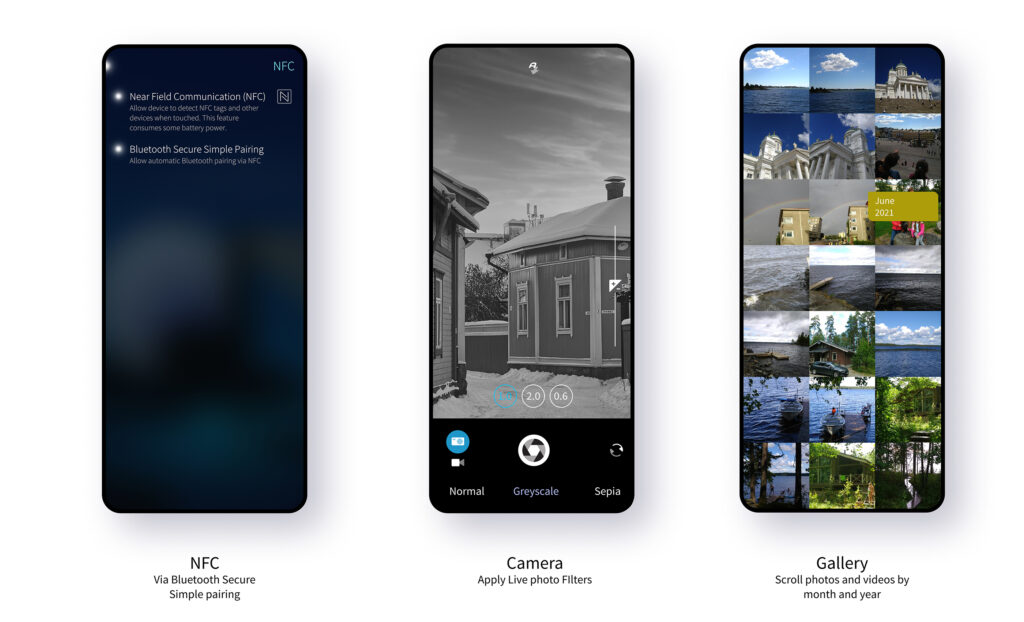 Building with strong Open Source foundations continues to pay dividends for the operating system, and we can all benefit from the contributions that have come from the community. Special thanks go to Michał Szczepaniak for his excellent contributions to improving the location accuracy when GNSS (e.g. GPS) is used. Damien Caliste has also continued to make abundant improvements to the Email app with PGP signing fixes, and to the Calendar stack in more areas than can be easily described here. Users of the Calendar app, especially if you’re syncing to external services, will see more stable and less error-prone results, and better error reporting in case something does go awry.

The latest release brings Latvian as an entirely new language with full support both for the keyboard and localisation throughout the operating system. Contributions have come from at least ten community contributors, with a special note to akerran, garaushi, Indus and JSEHV for their excellent and prolific language contributions. At Jolla we’re very proud of the localisation support that we provide. With the addition of Latvian this has now reached a total of 40 different officially supported localisations, an achievement very much shared with and made possible by the community.

Finally, we have poured our effort into addressing as many of the issues you raised from previous releases as possible. Over thirty issues directly reported in the forums have been investigated and fixed for the latest release. These include Android connectivity issues that have now been fixed, improvements to the MMS integration, synchronisation fixes, Bluetooth fixes, ambience fixes and more. With Sailfish OS devices used all over the world, connecting to different providers, different services and used in wildly different environments, it’s impossible for us to test all possible combinations. The bug reports you file are an important way for us not only to know about what’s important to you, but also to know about what might be an issue in the first place. Our thanks go out to everyone who submitted reports to the forum.

A lot, but not everything

We’ve packed a lot in to our Sailfish OS 4.4.0 Vanha Rauma release, and we’re proud of the result. The release has taken slightly longer than we’d originally planned, but we really hope you’ll agree with us that the wait was worth it.

Nevertheless, we never rest on our laurels, and there are a number of capabilities that we know you’ve been looking forward to, but which didn’t make it into this release. The two most obvious being VoLTE support, and support for the Xperia 10 III.

While it was never our intention for VoLTE to go in to 4.4.0, the release does nevertheless include many important pieces of the groundwork needed to allow this to happen in a future release. We still plan to bring VoLTE support to Sailfish OS later in the year. See the demonstration of simultaneous data transfer and VoLTE calling.

On the other hand, while we had hoped to do a joint Xperia 10 III and 4.4.0 release, we eventually decided to decouple the two, so as to get the 4.4.0 release out to you as soon as possible. The Xperia 10 III adaptation is cooking up nicely, and we’re super excited to get it out to you, but for that you’ll have to wait just a bit longer. 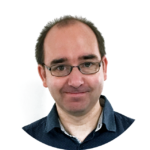