Sailfish OS reached a major milestone last year as we launched for the first time a downloadable, fully supported Sailfish OS – Sailfish X for the Sony Xperia™ X device which you can purchase by visiting our webshop.

Sailfish X has been a fun program for us and we can see that our customers are feeling the same way. We have received a lot of positive feedback and seen the OS spread far and wide. The amount of downloads has been a positive surprise for us and we’ve seen downloads in many places we didn’t expect. All in all, 2017 was a great start for Sailfish X. This year we want to continue on this exciting path and want Sailfish X to reach even more people. 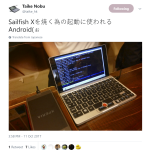 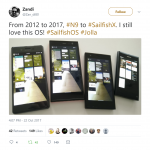 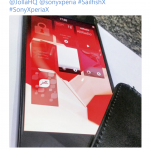 As usual, we target to make 4-6 Sailfish releases during the year, and publish those also for Sailfish X. We have recurring roadmap sessions with our licensing customers, and we’ll also go through all the input we receive via various channels and prioritize most important fixes and features based on the customer demand and community feedback.

One of the most important community feedback channels is together.jolla.com and your votes on topics do really count. For example, last year we made 4 Sailfish OS releases and fixed over 100 items you reported in together.jolla.com, benefiting all Sailfish users. Thank you for your valuable reports!

Our next release will be 2.1.4 Lapuanjoki. It’s almost ready and should go out in a few weeks. Specifically for Sailfish X there are fixes in Bluetooth support, mobile data reliability, WiFi tethering, and BTRFS support for SD cards. We also added many new languages to Sailfish OS. Special thanks goes to you, our community, for providing translations for: Chinese (Taiwan), Czech, Dutch, Estonian, Greek, Hungarian, Portuguese (Brazil), Slovenian, Spanish (Bolivia), and Turkish.

We will follow with 2.2.0 Mouhijoki couple of months later. With Mouhijoki we will add support of Dual SIM variant of Xperia X and expand the availability of Sailfish X to new markets where dual SIM support is a must have feature. We are also working on a new graphical installer for Sailfish X which makes installation simple and accessible also by non-technical people.

Our licensing partners have done significant efforts to improve business features of Sailfish OS and thus we will have several improvements and fixes for apps such as email and calendar coming up throughout the year. With Mouhijoki we will start to see results from that effort: it will include the often requested features of accepting and sending meeting requests for calendar events.

After Mouhijoki we will add support for some device features that have been missing, such as NFC and fingerprint authentication, and we have already started working on the next generation device.

Privacy is a key benefit of Sailfish OS and we are continuously improving the security of the OS. During the first half of the year, we’ll be adding memory card encryption, filesystem encryption, and email encryption. In the second half we will continue to improve security frameworks of the OS, and adding more security features like improved VPN support.

Other important areas that we’ll be working during 2018 are updating the Android runtime compatibility to a newer Android version, continue working on blockchain solution together with Zipper, and expanding the device portfolio even further.

Please remember that plans change and this is only the high level view of Sailfish OS and Sailfish X related work. We’ll implement a lot more features and continue monitoring the input carefully and adjust our plans based on the feedback we get.

We want to make Sailfish available to as many people as possible in as many markets as possible. However, for a relatively small company like Jolla, there are markets that are easier to enter while some are more difficult. In some cases the legislation or competitive landscape makes entering difficult for us even if there is demand. We’ve been studying the markets carefully and we’ve selected handful of markets for our next expansions. These are markets where there is clearly demand and opportunity, and the business environment is suitable for us.

So far, Sailfish X has been a digital download targeting Sailfish fans and early adapters but we are expanding the offering also to business customers and our regional partners. During the first quarter we target to start sales in Turkey and India, then expand to selected Asian markets (Malaysia, Indonesia, and Thailand), and further expand to South America (Brazil, Argentina) by the end of Q2.

Further, we all know that Xperia X will be superceded by newer models. There are some very interesting devices that we’d love to bring Sailfish to, and we’re working in collaboration with Sony to make this happen. Stay tuned for this!

We’ve been really happy with Sailfish X, but this year is going to be an even more exciting year for Sailfish X and the Jolla crew and we can’t wait for all of you to see and experience all the improvements that are cooking up.